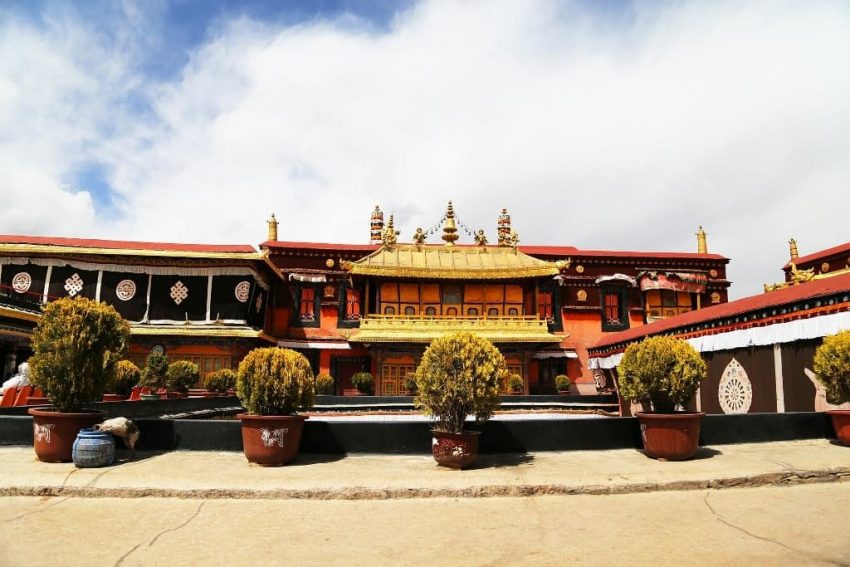 Tibet is an extraordinary travel destination, so much history and mystery. Samye Monastery was the first monastery built in Tibet, and the place where Tibetan Buddhism was established. Inside the monastery there are numerous frescos, sculptures, and prayer wheels. The monastery is set in a valley surrounded by barren mountains and sand dunes. The scenery around is austerely striking.

Potala Palace is one of the most recognized and beautiful structures in the world. Located in the ancient capital of Tibet, Lhasa, the place was once the residence of Dalai Lama until the current Dalai Lama fled to India after 1959 Tibetan uprising. With over 1,000 rooms, Potala Palace is a major tourist attraction today and is the best place to have a fantastic birds eye view of Lhasa. The palace is named after Mount Potala, the mythical abode of the bodhisattva Avalokitesvara. Its construction started in 1645 and took 3 years. The building measures 400 metres east-west and 350 metres north-south. It contains the living quarters for Dalai Lamas and houses great amounts of rare cultural relics including hand-written golden Buddhist scripts. The palace is 14 stories tall, and the visit involves climbing a lot of stairs up and down.

Tibet trekking top locations : Ganden to Samye Trek: This is one of the most popular treks in Tibet connecting the famed Ganden and Samye monasteries. Its one of the closest trekking routes to Lhasa and also one of the shorter treks at 4 days so it the best option for those with less time. Despite the relative ease of logistics it has great mountain views and is a challenging trek that includes crossing over Chitu La and Shug La, both these passes exceed 5000m (The word “La” means pass in Tibetan). The ruins of Ganden at the start are built high on a cliff and are attraction for many on day trips from Lhasa. One reaches the Samye Monastery at the end of the trek which is significant as the first Buddhist monastery to be built in Tibet and many Buddhists make a pilgrimage from across Tibet to visit this site.

Destroyed by lightning and war, Patala Palace had been rebuilt by the Fifth Dalai Lama in 1645 and since then, it has become the seat of Dalai Lamas and also the political center of Tibet. The 13th Dalai Lama extended Potala Palace to the present size-117 meters in height and 360 meters in width, covering an area of more than 130,000 square meters. Mainly comprised by the White Palace, the administrative building, and the Red Palace, religious building, Potala Palace is famous for its grand buildings, complicated constructions, devotional atmosphere and splendid artworks. The stone-and-wood-structured Potala Palace consists of the White Palace and Red Palace. The White Palace, comprising halls, temples and courtyards, serves as the living quarters of the Dalai Lama. The Red Palace includes various chambers for worshipping Buddha and chambers housing the eight stupa that contain the remains of fifth through thirteenth Dalai Lama. All the stupas are covered with gold foil. The most magnificent stupa belongs to the fifth Dalai Lama. It is 14.85 meters tall and inlaid with pearl and jade. The palace also collected a large number of sculptures, murals, scripture and other valuable cultural relics. There are also many other constructions in Potala Palace which include: the school of Buddhist Logic, the Seminary, the printing house, gardens, courtyards and even the Jail. For more than 300 years, Potala Palace has treasured many culture relics such as murals, stupas, statues, tangkas, and rare sutras. Potala Palace is indeed a must see in Lhasa.

To reduce our carbon footprint, we cap our Tibet tours at minimum group size and enforce a strict “leave no trace” policy. Every year our guides and staff attend eco-tourism training sessions hosted by Columbia University via the Tibetan Village Project. We do all this to ensure that future generations can understand what Tibet represents. Here at Explore Tibet, we are determined to share our homeland with you in its purest form. Read more info on Travel Tibet.