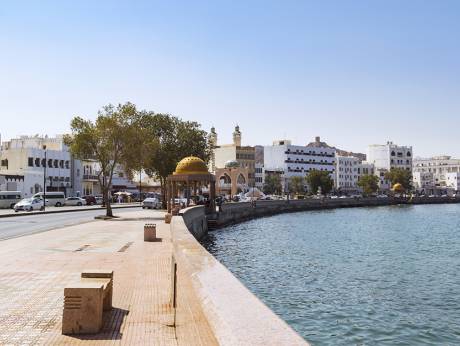 Oman, a land of majestic mountain ranges that rear skywards from the wilderness of rolling plains, where the fabled Arabian Oryx roam, and billowing dunes with their austere, romantic beauty. A land where ancient forts command the horizon, in the shadow of which many a date orchard flourishes, while in the land beyond, the aristocratic Bedouin continues a lifestyle of living which, for so long, has captured the imagination, across the centuries, of writers and artists around the world. Discover different type of adventures in Oman.

Oman, the Jewel of Arabia, until recently untouched by the outside modern world still has magnificent wildlife, including some rare species. The Sultanate is the only place where the peerless Arabian leopard still lives in the wild and where the mythic Arabian Oryx is bred and released in the wild.

On Oman’s Whale Coast we find species such as Blue Whale seldom seen anywhere else in the world. Exotic birds from Asia and Africa as well as birds indigenous to Oman are found throughout the country and the seas are still stocked with fish of all kinds, including the great game fish. Answer The Call of the Wild – and embark on one of our wonderful wildlife Sea Safaris to discover a whole new world of high interest and unexpected adventure.

The waters off the coast of Oman are one of the few areas left in the world where the water is clear and fish are bountiful. There are numerous species of fish and the most popular for sport fishing are Marlin, Sailfish, Yellow Fin Tuna and other game fish.

For those more interested in knowledge and observation than in action, we offer educational fishing tours in which the variety of fish and their habits are detailed, as well as the exciting opportunity for ethnographic photography of Oman’s timeless fishing culture.

The pleasures of sailing out over the sea on turquoise waters, changing to deep cerulean blue under the cloudless Arabian sky, while watching the coastline turn into a distant painting, make the experience of fishing in Oman an exotic dream come true.

There is nothing like the sea to calm and soothe the modern soul and to give us perfect relaxation. Imagine a cool breeze drifting by as the sun spreads a gold and silver blanket over the sea, and the enticing smell of steaks cooking on the barbeque on board as dinner is being prepared for you. There is splash as a fish leaps from the water close to the boat and you are lulled by the gentle movement of the waves and the distant sound of sea birds.

A camp has been set up on shore, where later you will sit by the fire under the stars on a matchless Arabian night. And, after a sound sleep in the pure and silent air of a remote bay, you have a golden morning to look forward to.